What is an LNG-powered cruise ship?

In recent years, the cruise lines have made huge strides towards being more eco friendly. Cruise lines are doing more than switching from plastic straws to paper and pushing passengers to be more eco-conscious. These days, cruise ships are being built to further reduce emissions and itineraries are meticulously planned to be more fuel efficient. Although the cruise industry receives a bad rep, companies are taking more action than ever to move towards greener practices.

In this way, cruise ships switching to be Liquefied Natural Gas (LNG)-powered is the latest trend by the cruise industry to move towards more environmentally friendly operations.

There are also advantages for the cruise lines to move towards LNG fueled ships. When engines are specifically designed for LNG fuel, there is less maintenance required due to reduced wear and tear on the engine. The cruise lines will also benefit from lower operational cost because these engines do not require the installation of a standard scrubber system. Costs are also reduced because cruise lines do not need to continue purchasing low sulfur-based fuel, which are typically very expensive.

In 2015, Carnival Corporation made history when it announced that AIDAsol, operated by AIDA cruises, would be the world’s first cruise ship to utilize LNG fuel. While docked in port, AIDAsol was powered by an LNG hybrid barge. This was revolutionary for the cruise industry and made waves for Carnival Corporation.

In 2018, the cruise line continued its pioneering within the industry by announcing that AIDAnova would be the world’s first cruise ship that would be powered both at sea and in port by LNG.

In 2019, Carnival Corporation launched Costa Smeralda, which is the second cruise ship to be powered by LNG fuel both at sea and in port. Carnival’s Mardi Gras, which also uses LNG fuel, was launched in December 2020.

Since the launch of these ships, more cruise lines are moving towards the use of LNG fuel. With reduced carbon emissions and increased awareness towards green practices, this is a welcome shift for the cruise industry.

Carnival Corporation continues to invest in LNG fuel and advancement of technology to reach its environmental goals and reduce overall carbon emissions across its fleet.

With Carnival Corporation leading the industry, more than 20 ships have been launched in recent years that are powered by LNG fuel. In 2019, P&O’s Iona was launched as an LNG-powered cruise ship.

Disney Wish is the first ship in Disney’s fleet that will use LNG fuel to power its propeller system. The newest ship for Disney is set to launch in the Summer of 2022.

MSC Cruises also announced it would be launching its most technologically advanced ship, MSC World Europa, in 2022. The cruise ship will be developed using 50-kilowatt LNG powered solid oxide fuel cell technology. The cruise line indicated that this technology will further reduce carbon emissions by an additional 25% compared to standard LNG engines.

With MSC World Europa launching in the near future, there is further pressure for other cruise lines to adapt the latest LNG technology. As more cruise ships in the industry become LNG-powered, the cruise industry can continue to make progress towards reducing its carbon footprint and moving towards a long-term goal of having zero-emission operations.

Royal Caribbean's Icon of the Seas will be their first LNG-powered ship, which will also rely on fuel cell technology.

The cruise line said that LNG makes for “virtually zero sulfur dioxides and particulates” and a “significant reduction in nitrous oxides.” The ship will also use shore power connectivity to remove emissions while connected at port, as well as advanced waste heat recovery systems that repurpose heat to be used as energy onboard.

Icon of the Seas is a 5,000-passenger ship that is under construction at Meyer Turku shipyard. The vessel is set to debut in fall 2023. 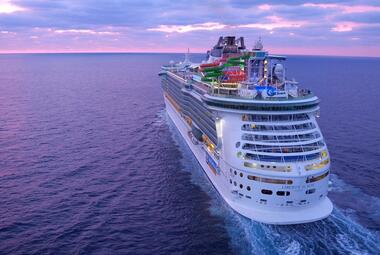