Celebrity Beyond is the newest ship from Celebrity Cruises - and it's like nothing the cruise industry has seen before.

From the incredible innovation to the intricate and thoughtful design around every corner, Celebrity Beyond takes cruising to a whole new level.

We were lucky enough to be invited for a 2-night sailing onboard Celebrity Beyond for its naming and christening ceremony. This is a longstanding maritime tradition that involves smashing a bottle of champagne against a ship's hull to symbolize the ship's ceremonial debut.

With help from godmother Simone Biles, the most decorated gymnast of all time, and Captain Kate McCue, Celebrity Beyond was official named and christened today in a ceremony as beautiful and unique as the ship itself.

Once onboard the ship today, we made our way immediately to our cabin on Deck 7. Our balcony stateroom features Celebrity's new Infinite Veranda, which almost feels like a sunroom addition to our cozy cabin.

Celebrity Beyond has a special warmth onboard - something I've never felt before on a cruise ship. The accent colors in our balcony cabin exuded similar feelings of warmth.

There are hints of white, grey and marble throughout our cabin. This feels both welcoming and trendy at the time time.

Our balcony cabin features a large king bed, large sofa, vanity, closet and infinite veranda balcony. We were surprised by the tech box on the vanity, which houses multiple outlets and includes USB plugs.

Our bathroom is large and spacious with one of the biggest showers we've ever had on a cruise ship; it also features marble tile and plenty of shelving.

In fact, there are hints of marble everywhere around the ship. In the hallways and elevators, you can find accents of marble incorporated throughout the design aspects. This creates a very modern and trendy vibe onboard Celebrity Beyond.

The hallways have bright lights to guide you to your stateroom in a manner that's equally sleek as it is modern.

There's also plenty of greenery incorporated throughout Celebrity Beyond. After dropping off our luggage, we wandered around a few decks and stumbled upon the Eden restaurant. We were welcomed with a myriad of plants as we walked into the restaurant.

Even the large letters of Eden were filled with plants, which perfectly accentuates the overall the white and grey hues throughout the ship. Everything onboard is very modern while still feeling warm and intimate.

Although we didn't dine at Eden, we appreciated the decor with more plants, large wicker chairs and emerald green tables. There was a live interview being recorded during this time, so we weren't able to completely enjoy all the views that Eden has to offer.

There's also a small cafe in Eden that has salads, sandwiches and delicious looking desserts to enjoy for lunch.

As we explored more of the ship, we were surprised to find wooden staircases. There's also a notable amount of thoughtfully-placed artwork around Celebrity Beyond, which is something the cruise ship prides itself on.

Every nook and cranny onboard Celebrity Beyond feels intentional - we've truly never seen a ship more modern and beautiful.

We were scheduled to eat dinner at Normandie, which is one of the main dining restaurants onboard. We found there to be tons of eateries and bars on Celebrity Beyond - each with their own unique offerings and experiences.

All roads lead to the Grand Atrium onboard Celebrity Beyond. This central location on the ship is home to the famous Martini Bar, along with the World Class Bar and Craft Social Bar. There's also a small stage for live musicians to perform and a grand piano.

We tried two martinis tonight before dinner, including a cream-based white chocolate drink and an apple butterscotch martini. Both were excellent as we listening to the pop music blasting throughout the atrium.

Along with bars, the Grand Atrium is a natural gathering location with its high-energy and welcoming environment. There are also restaurants surrounding the atrium, including Le Grand Bistro and beloved Cafe Al Bacio, which serves up gourmet coffee and pastries.

We enjoyed fun cocktails and bar snacks, including brie mac & cheese and truffle fries, at Craft Social Bar before dinner. I would have been mistaken for my local Craft Bar if I hadn't felt the ship start to move while we were dining. There's a large assortment of beer available here as well.

We are hoping to grab a snack at Cafe al Bacio tomorrow, as everyone raves about the pastries and desserts here.

Walking around the ship, you'll find even more examples of artwork to marvel at. We stumbled upon this trippy hallway while looking for our muster station during the safety briefing. With mirrors and interstellar vibes everywhere you looked, we weren't sure which way was in our out of this unusual walkway.

On a brighter note, we made our way to the top deck while looking for the Oceanview Cafe buffet for lunch. The Solarium is a signature venue on both Celebrity and Royal Caribbean ships.

The plush loungers adorned with pillows and towels were so welcoming, I would have loved to take a nap if I wasn't scrambling to take as many pictures as possible during our 2-night media cruise.

The greenery found on the outskirts of the Solarium creates such a warm and welcoming environment - a common theme onboard Celebrity Beyond.

You won't find any splash pads or waterslides onboard Celebrity Beyond; instead, the top deck has tons of open spaces for cruisers to lounge, swim or relax.

The pool deck not only has lots of pool loungers, but also numerous loveseats, wicker chairs and cozy booths. With the pool bar close by, this is a great spot to hang out in the sun while sipping a poolside cocktail.

For lunch, we chose to dine in Oceanview Cafe. This is the main buffet available on Celebrity Beyond and serves up breakfast, lunch and dinner.

Pink velvet booths and lamps with warm Edison bulbs greeted us at the entrance of the buffet. This is hands-down the most stylish and sleek buffet that I've ever dined in.

You won't find hot dogs, hamburgers and slices of pizza in this buffet; instead, you'll find a huge assortment of international cuisine ranging from lamb tagine to Indian curry and paella.

As a sucker for sweets, I couldn't help but try the strawberry creme brulee while marveling at the French-style desserts available. I felt like I was in a local patisserie in Paris looking at the delicate display of pastries and sweets - certainly not something I'd expect to find on a cruise ship.

The innovative Magic Carpet can't be missed on the top deck. It's bright orange coloring makes it pop against the navy hull of the ship.

The Magic Carpet utilizes a catapult system to move along the decks of Celebrity Beyond. This space can be used as a tendering launch pad on the lower decks during the day while transforming to a trendy bar in the nighttime on the top deck.

On the way to the Magic Carpet, you'll find this mesmerizing, asymmetrical walkway - it's the picture perfect walkway! It's pretty hard to see this walkway and not want to take a picture walking through it.

Make our way to the back of the ship, we found the Sunset Bar. This large space is situated at the very back of the ship to give suburb ocean views while you can sip on a craft cocktail. The bar is surrounded by loveseats and loungers.

There are 4 different main dining rooms onboard Celebrity Beyond; tonight, we dined in Normandie Dining Room. This menu consisted of Celebrity classic entrees and appetizers while also featuring French-inspired cuisine.

We enjoyed baked brie for an appetizer and pastry-wrapped beef tenderloin for dinner. Dessert consisted of apple crumble and chocolate cake. It was the perfect sweet ending to our day! 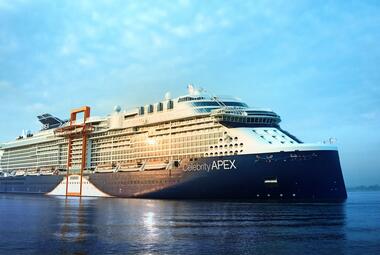 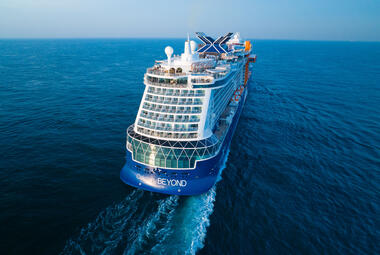 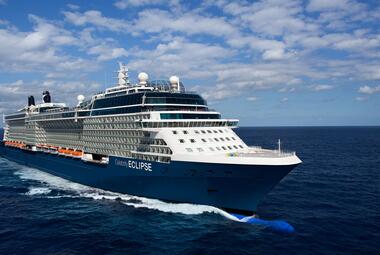 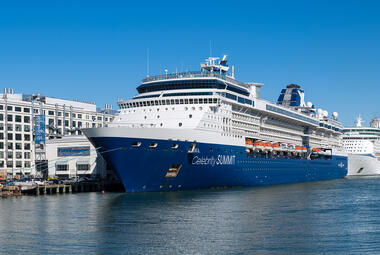 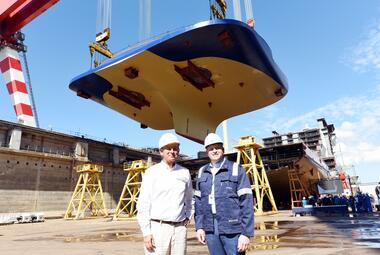 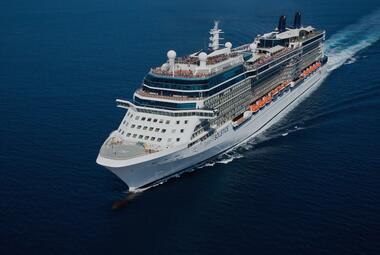