Guide to the AquaDuck, AquaDunk, and AquaMouse on the Disney Cruise Line

The Disney Parks are known for their world-class attractions and rides, which delight guests from all over the world every day. If you, like many guests, still want to experience the fun and excitement of Disney’s rides while on a cruise, there are a few unique water ride options on the Disney Cruise Line ships that you’ll have to try during your next DCL sailing.

Sailing on the Disney Magic? You’ll get to experience the AquaDunk, a water slide that starts with a fast drop and then moves into an oversea tube.

Guests on the Disney Fantasy and the Disney Dream can ride on the AquaDuck, a unique water coaster that travels around the aft part of the ship. Both are lots of fun and are included in your cruise fare - so you can ride them over and over again without paying any extra.

The Disney Wish features an upgraded version of the AquaDuck: The AquaMouse.

The AquaDuck, AquaDunk, and AquaMouse are generally are in operation daily, but you’ll want to check the Daily Navigator or the Disney Cruise Line Navigator app to see the specific operating hours for the day. We’ve found that the lines (especially for the AquaDuck) can get long during a day at sea, but usually ease up later in the day.

On port days, the queues are often shorter, so if you are departing the ship later in the morning at your port of call, visit the AquaDuck, AquaDunk, or AquaMouse first. Typically each day, guests do line up right before the attraction opens for the day, which is another way to ride without a long line.

During one day at sea on the Disney Fantasy, my family booked an afternoon excursion and our kids enjoyed spending the morning riding the AquaDuck over and over again.

Like attractions at Walt Disney World, signs let you know how long you can expect the wait to be from various points of the queue. After riding it once, you’ll have a good idea of how fast the line moves.

The AquaDunk is an exciting, thrilling waterslide that starts with a steep drop before going into an overwater clear tube that shoots out over the ship. It was added to the Disney Magic during its 2013 renovation, and the Disney Magic is the only ship with an AquaDunk.

The AquaDunk is located on Deck 13 at the forward funnel. You will need to climb up quite a few steps to reach the top platform where you enter the ride. Leave your shoes in the cubbies at the bottom, because you won’t be able to keep them with you.

After you reach the top, you’ll be guided into a clear capsule, where you’ll stand up vertically and cross your arms. Once in position, you’ll countdown to the exciting point when the bottom platform quickly opens, rapidly dropping you into the clear tube. The ride down is 212 feet (3 stories!) and goes by very quickly.

The AquaDunk is a single rider waterslide, and there’s no tube or float to ride in. Guests must be at least 48 inches, and there’s a measuring stick at the bottom of the stairs. So, kids won’t have to wait in line only to be disappointed at the top if they aren’t tall enough.

Guests can’t carry any loose objects like phones or cameras on them, and you can’t have any exposed metal or buckles on your swimsuit. Expectant mothers can’t ride, and guests must be in overall good health.

The AquaDuck is a water coaster that was first introduced with the debut of the Disney Dream, and later with the Disney Fantasy. It’s an exciting water ride but it is definitely more gentle than the AquaDunk.

The 765 foot ride is located on the deck 12 aft area of the ship and includes a 4 deck drop. Like the AquaDunk, the storyline of the AquaDuck involves Donald Duck and his three nephews who “designed” the ride.

Leave your shoes and towel in the cubbies at the bottom of the stairs before walking up to the top. The AquaDuck includes a two-person raft, so you can ride with someone else. After you get into position on the raft, a small conveyor belt moves to lead the raft right onto the coaster.

The actual ride takes you through a clear tube that goes up and down as you travel across the aft of the ship. There’s a steady spray of water to keep you moving, until the raft lands in water at the end. In general, while you will get wet, you won’t be submerged.

At night the AquaDuck is especially beautiful as it is lit up. While it’s still a short ride, it’s much longer than the AquaDunk.

Available exclusively on the Disney Wish, the AquaMouse has been dubbed the "first-ever Disney attraction at sea" and is an updated version of the AquaDuck. Inspired by Mickey Mouse animated shorts, riders will embark on a roughly two-minute immersive journey that includes video screens and sound effects. Be prepared for a whooping 60 water nozzles to spray you throughout the ride!

Ride restrictions are similar to those of the AquaDuck: 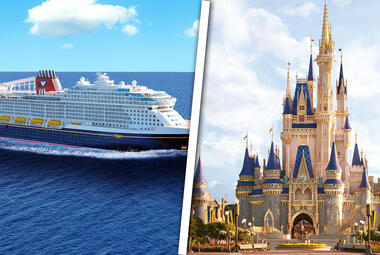 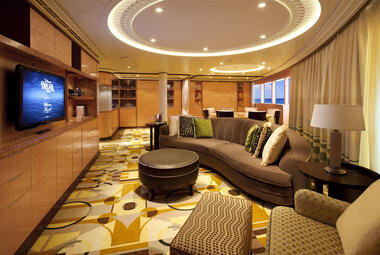 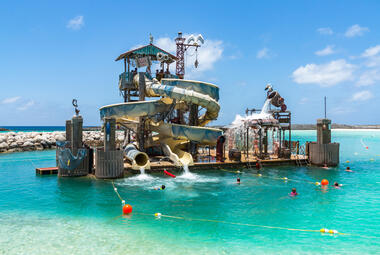 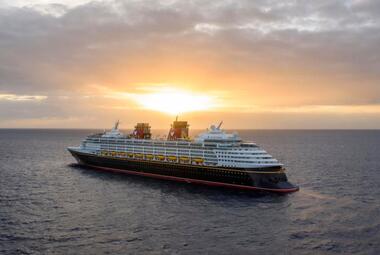