What are the crew areas like on a cruise ship?

Crew members live on cruise ships while they are working onboard, and they have an entire area of the ship just for them.

How much different are crew areas from guest areas, and what do these facilities look like?

In some cases, crew areas are a lot like guest areas because some crew have guest privileges. But not all crew have these privileges, so cruise lines dedicate certain parts of the ship just for crew.

Depending on the ship's size and age, how much space is reserved for crew members will vary. Some of the newer ships have upgraded facilities.

On many ships, the lowest decks are reserved for crew members only.  This is the part of the ship that has critical cruise ship functionality, such as the engines or waste management.

The lower decks are also home to most crew cabins. It is not uncommon for crew cabins to be located on decks below the water level, and sharing a cabin with another crew member is commonplace.

Getting around crew areas 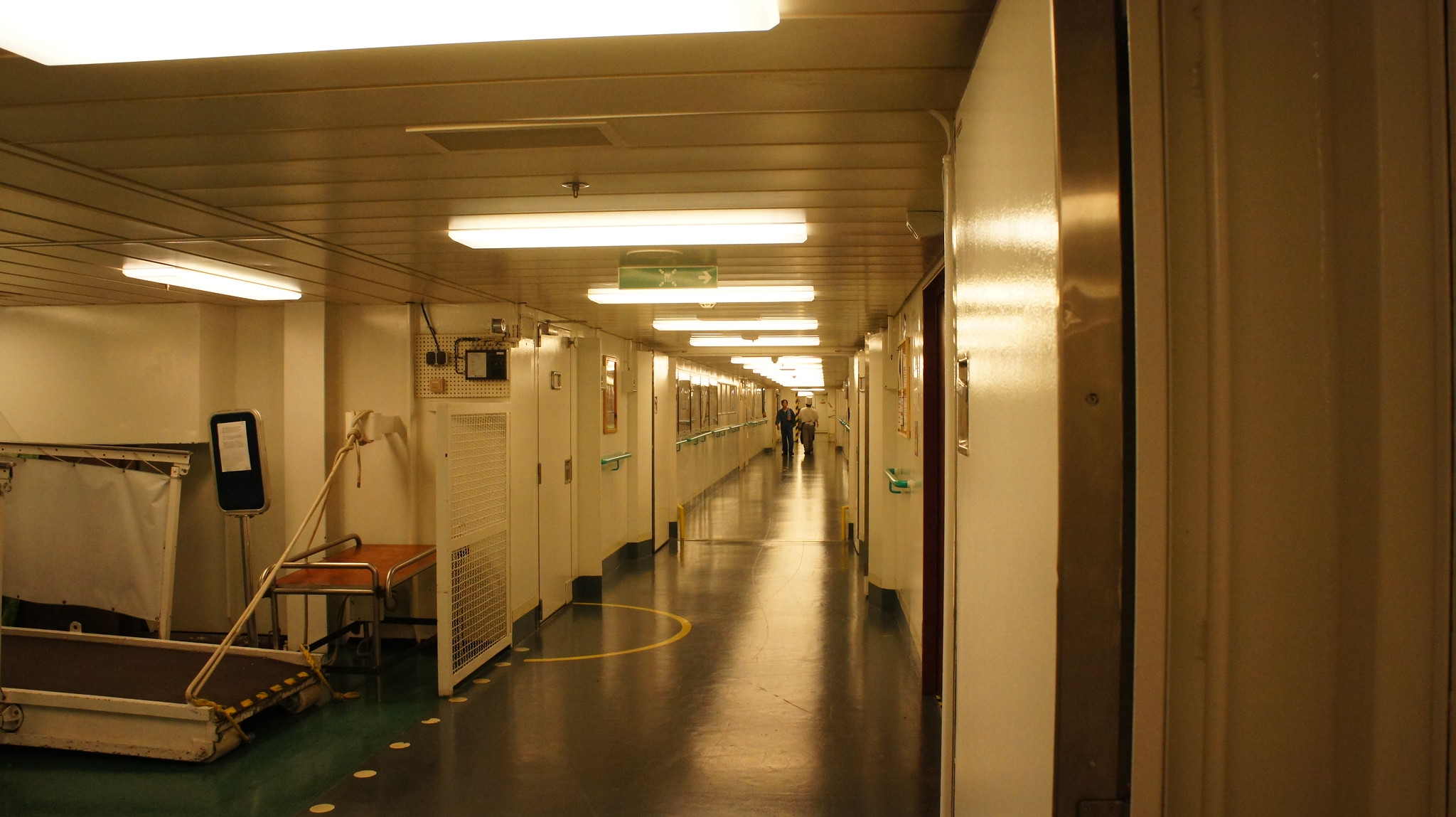 Crew areas are not easily accessible from guest areas, but they are all interconnected on their own network of walkways.

Many ships have a large thoroughfare that runs the length of the cruise ship from bow to stern. On Royal Caribbean cruise ships, this is often referred to as "I-95" because the large hallway reminded someone of the highway that runs up and down the east coast of the United States.

Up and down the corridor are important notices and announcements pinned to the wall, so guests can quickly glance at them as they go about their day. 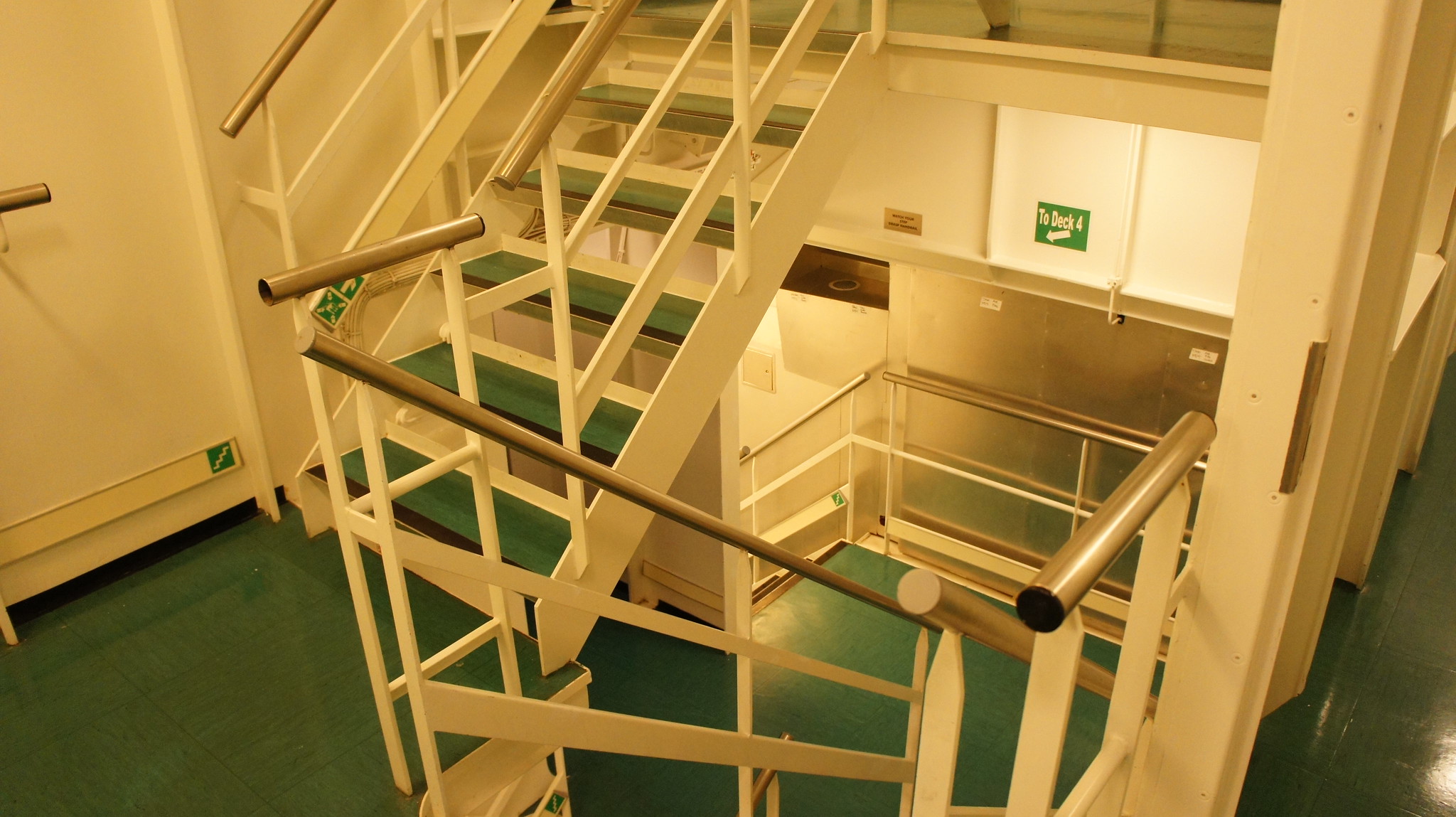 Not only are these corridors ways to get around the ship, but they can also be temporary storage. Often luggage, garbage, and supplies are stored in these corridors until they can be moved somewhere else.

There are also elevators and stairwells reserved just for crew members.

Guests can sometimes get a glimpse of these areas when they go to the ship's medical facility, or disembark on a gangway. 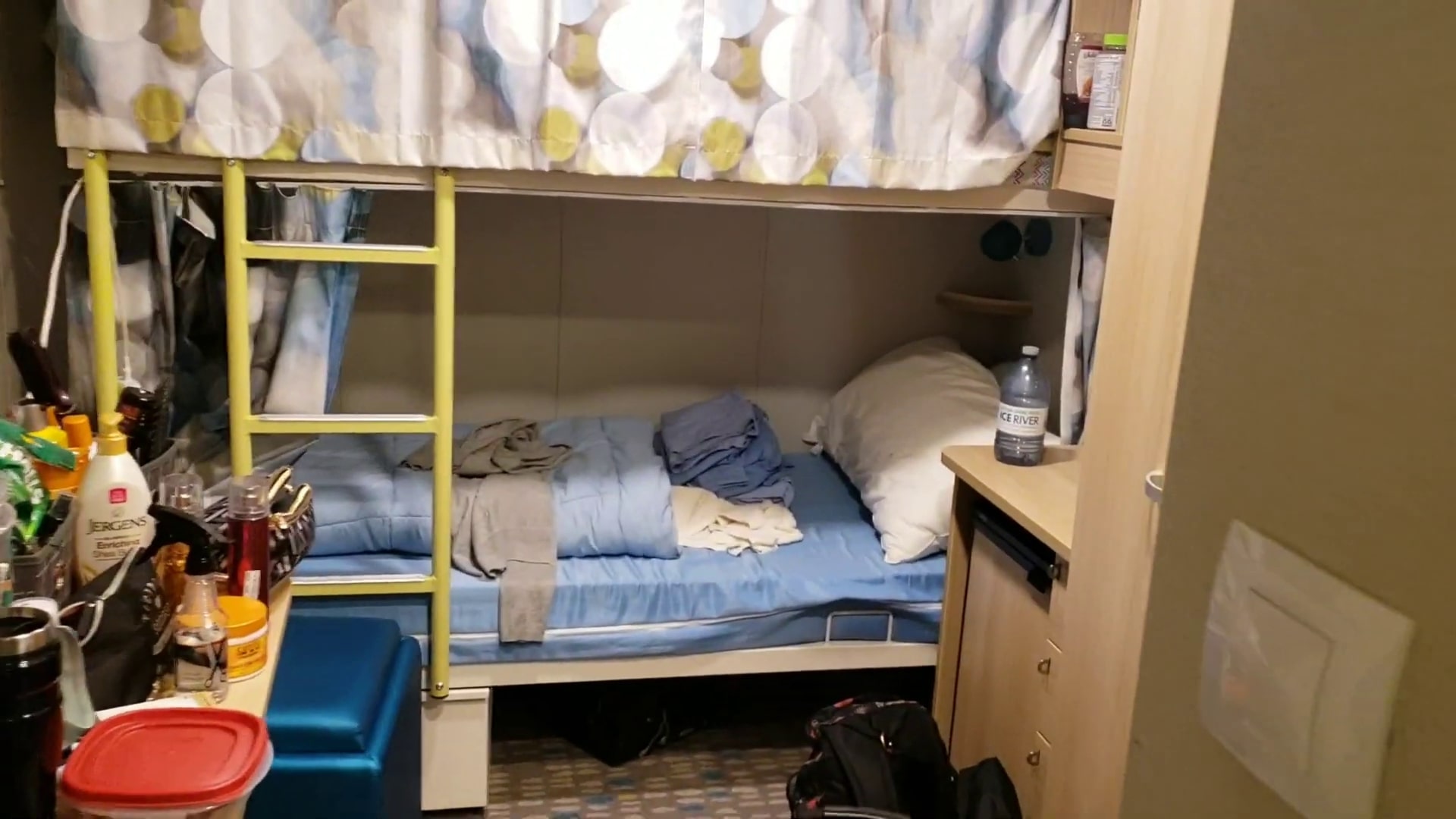 Depending on your rank or title, the cabin you get as a crew member will vary.

Typically, two crew members share a cabin, although there can be more in a larger cabin.

Unlike guest staterooms, crew cabins are more utilitarian. Almost instantly you will notice less decorations and a smaller size compared to a guest room.

Bunkbeds are the usual type of bedding, as it allows for the maximum amount of space.  Since these rooms are typically small, every square foot of space counts.

Some cruise ships add curtains to each bunk bed to provide a little more privacy for crew.

Just like a guest room, there is shelving, storage space, a television, cooler fridge, and a private bathroom.

For crew members that achieve a higher rank or title, that may mean a larger room, window, and arguably the best feature: not having to share the room.

When crew members are not working, they have their own bars they can relax in too.

Similar to guest bars, these are places for crew to unwind and enjoy a cocktail or beer. They are usually less themed than guest bars, and often you will find mismatched furniture from other venues onboard.

You might find televisions, table games, or just tables to sit at and relax.

Crew parties are very common, and there can be themed nights at a bar to encourage extra fun for crew. 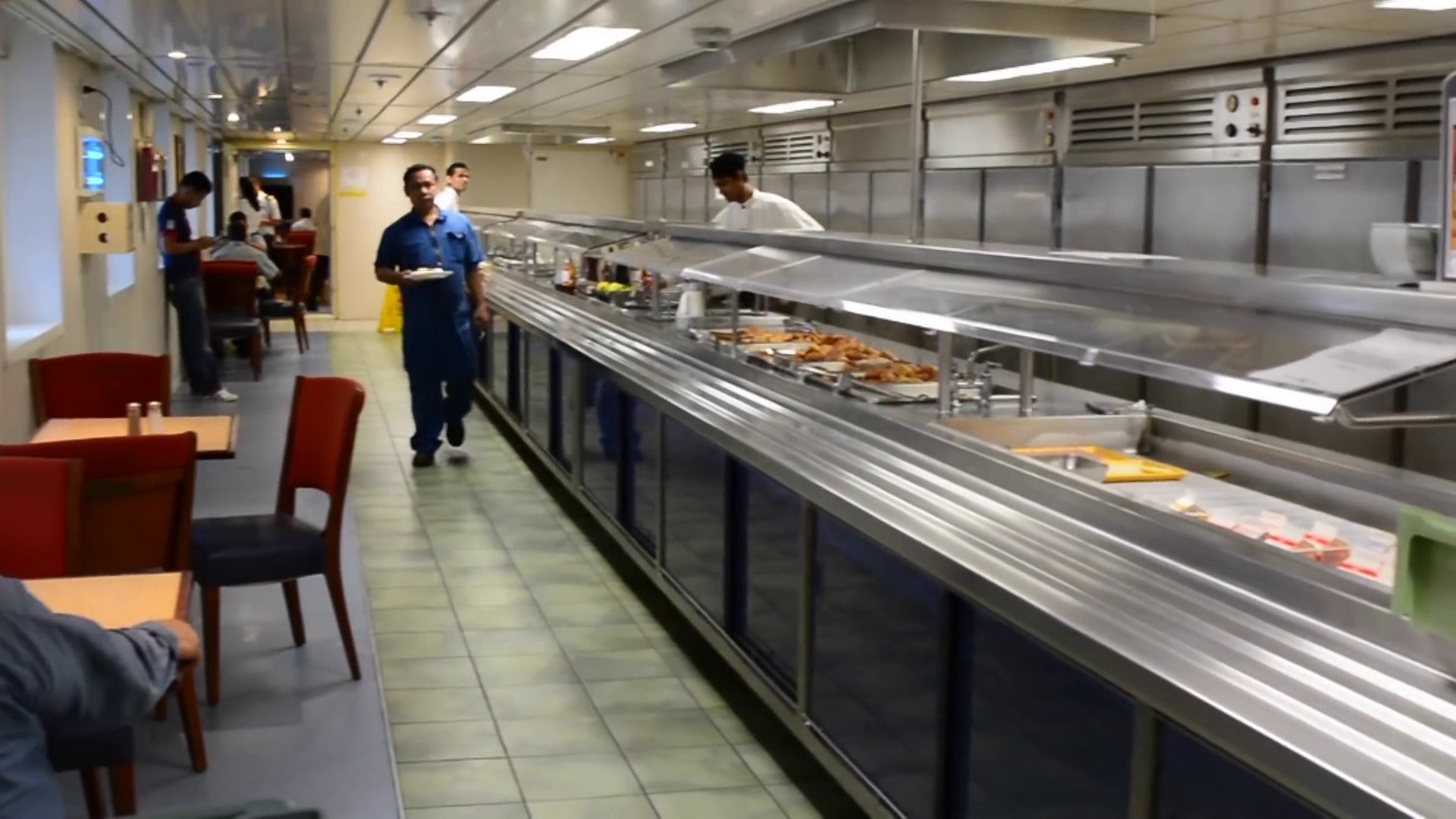 When it's time to chow down, crew members have their own restaurant onboard to enjoy all the meals they need.

The crew mess is the name of the buffet style restaurant crew members can dine at when off duty.

The crew mess sometimes has prepared foods, ready-to-go foods, and ways to heat up food brought in.

Just like the ship's buffet that guests experience, crew members line up and go through the line to take the food they want and then find a seat at an open table.

Just like guests, there are basic beverages included for crew members, such as water, tea, or coffee. Soft drinks and alcohol will cost extra. 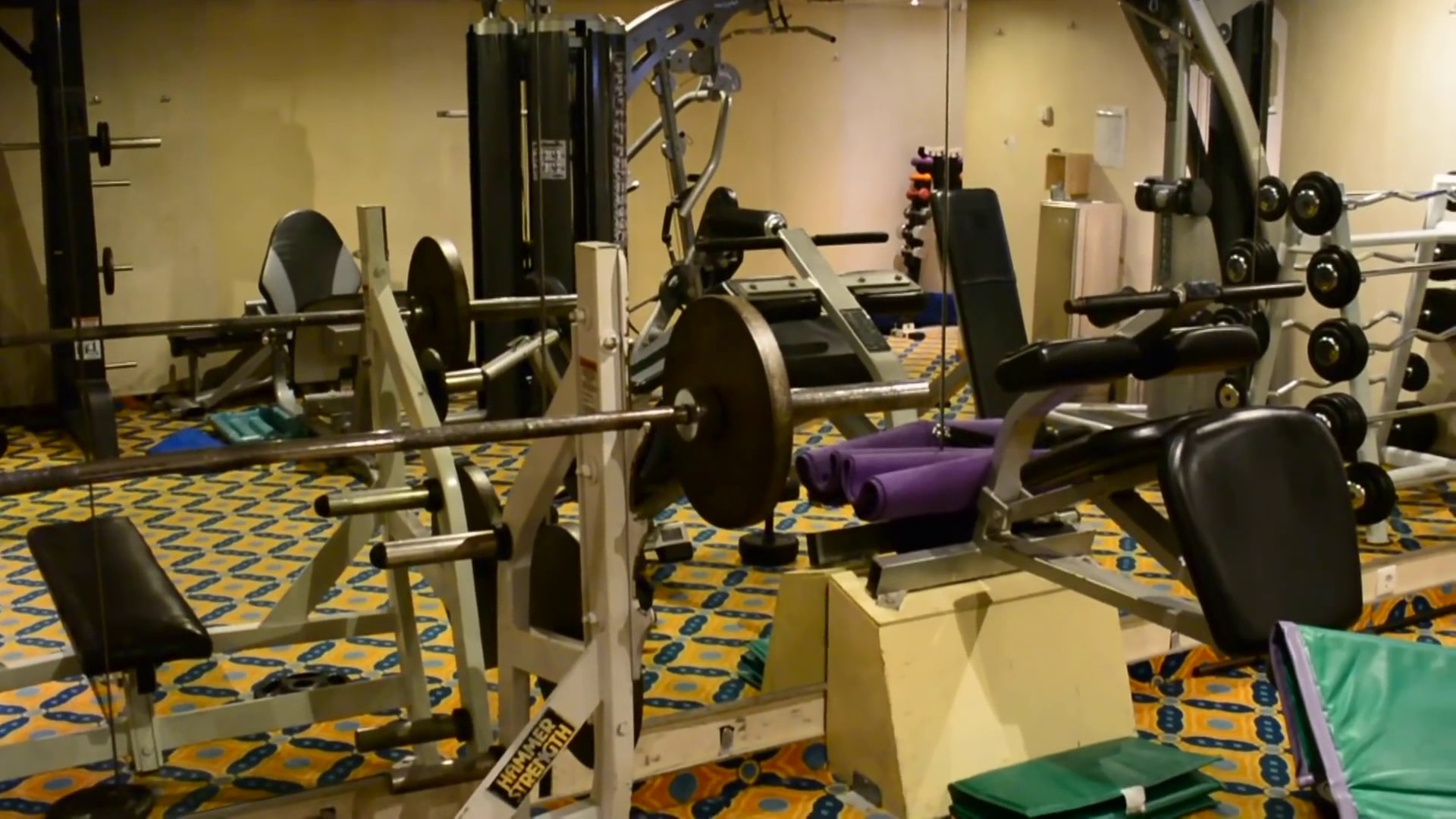 Staying healthy is as important to crew as it is to passengers, and there is a special fitness center just for them.

Sometimes referred to as the weight room or gym, crew members can find free weights and even some machines to use so that they can exercise.

The crew gym does not have as many machines or frills as guest gyms, but some crew members with a higher rank are able to use the guest fitness center. 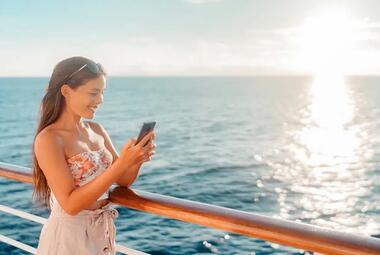 Do cruise ships have WiFi? 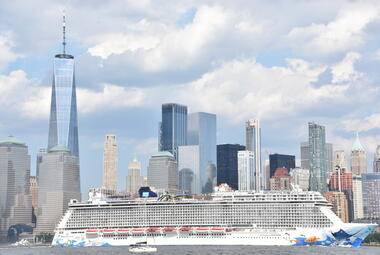 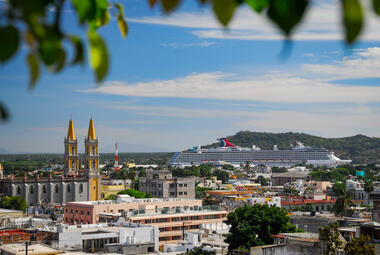 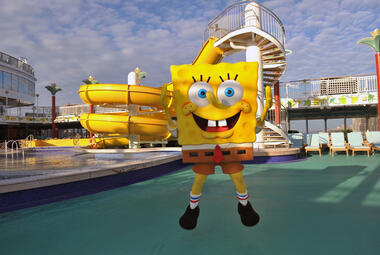 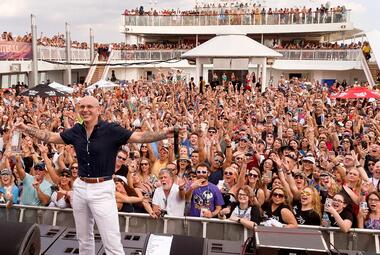 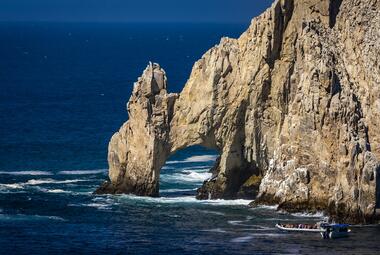